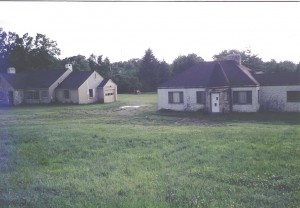 Short history of the friends of The Castle

In 1987, at the request of Sandy Bornjenko, Director of the Life Enrichment Center, we formed a support group of family members of severely mentally disabled clients of South Community Inc, one of four major mental health providers in Montgomery County. We named our group “Friends of South Community” we decided at this time that we would be an action group that would take on projects to help the mentally ill. We also decided that we would help in supporting each other through trying times and assist south community in serving their clients, who were also our family members. Our philosophy was that we would organize, not agonize.

We first met Tony Staub in 1990 through Barbara Friedly, an advocate for the mentally ill who had just recently helped found places. Tony had two run down properties at 133 North Main Street, Centerville and he presented them to us with the idea that the north building be renovated and used as a home for the mentally ill and the south building be converted into a gourmet bakery. We made a feasibility study and decided that the costs would be prohibitive to use these facilities for these purposes. The north building would only accommodate four to five people and the south building was infested with termites and would have to be razed and be rebuilt. Therefore, this project was abandoned.

We had not heard the last from Tony Staub and Barbara Friedly. Barbara came to us with another idea, why not adopt the philosophy of the Fountain House and convert the properties into a drop in center. This idea was presented to us in the spring of 1991. Tony offered this property to us for this use with the stipulation that we pay only the interest on a loan he would need to take, the taxes on both properties, cost of insurance, and any other costs entailed. He would lease the properties to us based on these costs, for a prolonged period of time, as long as they were used for this purpose.

At this time we consulted with the professional staff of South Community, who surveyed their clients and found that 90% would benefit from a social club, which was a term of reference than drop, in center. We consulted with other prominent mental health professionals who concurred. We consulted with some mentally ill people who had recently been very disappointed with the closing of the valley club and progress place, which were drop in centers and had been closed because of budget cuts. We made visits to drop in centers in butler and Clark counties and as far away as Hemet and Riverside, California. We found that there was a definite need for our mission.

In spite of some objections of some of the members of our friends group that we use existing mental health facilities,

We seized this opportunity. The Castle got its name due to the unique architecture of the structures turrets, local residents referred to it as the castle. We thought it was fitting to use this name, to us The Castle meant a safe place or a haven for those in need. Shortly before we made the decision to proceed, Tony Staub was moved by a recent movie, “the field of dreams”. Tony said “build it and they will come”. Indeed they did.

It took from the spring of 1991 until the fall of 1992 to get our tax exempt status and to line up the financing and volunteer labor to renovate The Castle. We began then in dead earnest, recruiting from our friends group, the University of Dayton, Telephone Pioneers of America, Tom Danis Construction Company, NAMI of Montgomery County and many friends. On September 27, 1993 we hired our first employee, Anubis Reeder, who had been working for 31 years as a psychiatric nurse. As in all of our steps to make the castle a reality, we took great pains to be sure our manager was as dedicated, committed and competent as we were. This is the most important value The Castle has to offer, that we understand and accept each member, unconditionally. One year later, with great pride, on October 11, 1993 we opened our doors.

We have never regretted this decision. We are heartened

And pleased with our results. We have made our mark and are making a big difference in the lives of those we serve.

“I used to think my goal was to become like I was before the illness. Then I realized that I was older, that I had experienced a lot and learned a lot, even from my illness, and my goal became to discover who I am now and make the best future for myself that I can.”